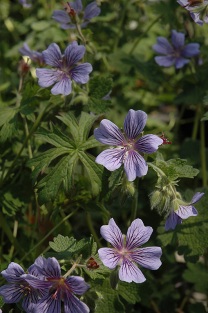 Many varieties of hardy geranium plants exist and thrive in full sun to shady locations. When considering how to plant hardy geraniums, consider the location where you wish to plant and choose an appropriate plant for the available sunlight. Also, locate the plant where it has room to sprawl, clipping the edges back if necessary to keep it within its boundaries. Some varieties may be used as ground cover, while others are attractive as border plants. Brighten the rock garden with various cultivars of the cranesbill geranium flower, which may be as short as six inches or as tall as three feet. Smaller varieties may cascade from containers.

Hardy geraniums should be planted so the crown of the plant is at soil level; planting the crown more deeply can result in the loss of the cranesbill geranium. Hardy geranium care involves the removal of spent blooms and occasional watering for the best performance. When mature, cranesbill has few insect pests and requires only limited fertilization. Rich organic soil is often all the plant needs for optimum growth and flower set. Propagation is by semiripe cuttings in summer, by seed, or by division in autumn or spring.

Notable features of hardy geraniums include that they are deer resistant, drought tolerant (once established), a good ground cover plant, low maintenance, and they will help with slope and erosion control.